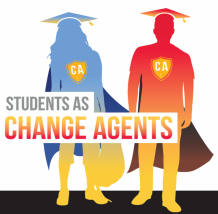 The Change Agent Scheme
Over the last ten years, the University has developed an innovative student-led action research initiative that enables students to act as change agents in their educational environment. Students negotiate a topic of concern or interest and engage in a small research project. They then take responsibility for providing recommendations and solutions and putting them into practice. To date, hundreds of change agents’ projects (125 last year alone) have promoted some important developments in curriculum delivery and employability activity in many subject areas across the University, and have impacted on decision-making processes such as for the new Exeter Forum (now the hub of the Streatham campus). Students run Careers Fairs and Module Fairs, a buddy scheme for year abroad students; they have developed resources for mental health and well-being, for international students, to highlight sustainability, to improve seminar teaching; they have demonstrated the need for more support for mature students, and technology for teaching. They ran an Annual Staff Learning and Teaching conference, to great acclaim. Dozens of these projects are either run by, or impact on and are of benefit, to those who might be categorised as “Hard-to-Reach”.

What did your project entail and what were the motivations behind it?

Change Agents projects are fantastically varied. They tackle all sorts of issues and produce a wide array of results. It is really interesting to hear from individual students what was in involved with their project and where their motivations came from.

Who are Change Agents and do they identify with the title?

Any Exeter student can become a Change Agent. They are Undergrads or Postgrads, from all disciplines and each with a different project. The scheme gives them the opportunity to affect change but do they identify themselves as Change Agents?

What support do you get from the University?

Although the Change Agent projects are student led, they would not be successful without the support from staff from every part of the University. But of course the staff themselves benefit from being involved and from improving the University environment.

• Employability skills and experience for a CV (The Exeter Award); engaging with change processes and something different to talk about at interviews

• Involvement in communities of practice, with staff and students working in collaboration and a feeling of pride to engage with the University

• The motivation and interest at working to resolve difficult problems

Key benefits to the sector

The initiative has created widespread recognition at a national level, even from the earliest days through a case study for the 1994 group and another in the previous government’s Higher Ambitions publication; then case studies for the HEA and for JISC.

Key benefits to the University

The Change Agent’s initiative is important for:

• Providing a major USP for the Exeter student experience at a time when we need to be distinctive and raising the University’s profile in the HE sector as one that embraces change and innovation.

• Supporting higher student satisfaction scores and giving students employability skills, so that Exeter students stand out from the crowd

• Attracting the best tariff students, and students who wish to engage fully with the University

• Improving the ethos and culture of the University by promoting collaborative partnership.